Our Founders and History 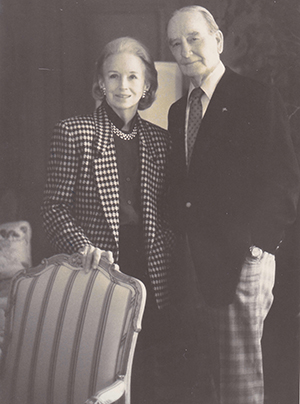 During their lives, Joe and Doris were deeply involved with Children’s Medical Center and Texas Scottish Rite Hospital for Children, the American Red Cross, United Way, the Dallas Citizens Council, The Dallas Foundation, the Society for the Prevention of Cruelty to Animals, the State Fair of Texas, the Dallas Bar Foundation, the Dallas Historical Society and the Dallas Zoological Society.

Today, all four children and seven of Joe and Doris’s nine grandchildren have served as trustees for the family foundation; continuing the generational legacy of giving in Texas.

Joseph MacDonald Dealey (1919–1995), second of three children born to Clara MacDonald and E.M. “Ted” Dealey, was born in Dallas on July 18, 1919. Both his father and his grandfather, George Bannerman Dealey, were publishers of The Dallas Morning News.

Joe’s own career at The Dallas Morning News began in the mailroom of The Dallas Journal, where he worked in the spring of 1937 before he finished high school at Highland Park. After graduation, he attended the University of Texas in Austin, and the Southwest School of Printing before being drafted into the Army Air Corps in 1942. After completing basic training at Sheppard Field in Wichita Falls, Joe attended aircraft mechanic’s school at Dallas Love Field before deploying overseas. Following World War II, he returned to the paper in 1946, where he would work until he retired as chairman of the board and publisher in 1984.

Doris Carolyn Russell Dealey (1919 – 2005) was born in Dallas on August 11, 1919, the only child of Frances Mays and Don Carlos Russell. She graduated from Highland Park High School, and attended Stephens College in Columbia, Mo. and Southern Methodist University. During World War II, Doris was a volunteer for the Motor Corps of the American Red Cross in Dallas.

After her husband’s death on April 7, 1995, Doris founded the Joe M. and Doris R. Dealey Family Foundation.  She was instrumental in funding the employee child care center of Texas Health Presbyterian Hospital Dallas with a $2 million gift in honor of her late husband, which has played a key role in the hospital’s success in recruiting and retaining doctors, nurses, and professional staff.

Doris also championed causes like Equest Therapeutic Horsemanship, and was involved in initiating the youth poetry contest at the Dallas Public Library to perpetuate her late husband’s memory and his passion for language and self-expression.  The program, now known as the annual Express Yourself! Youth Poetry Competition, which the foundation continues to support to this day, has been expanded to include a youth Poet Laureate of Dallas in 2022.